Partners unite to protect women out in Liverpool at night 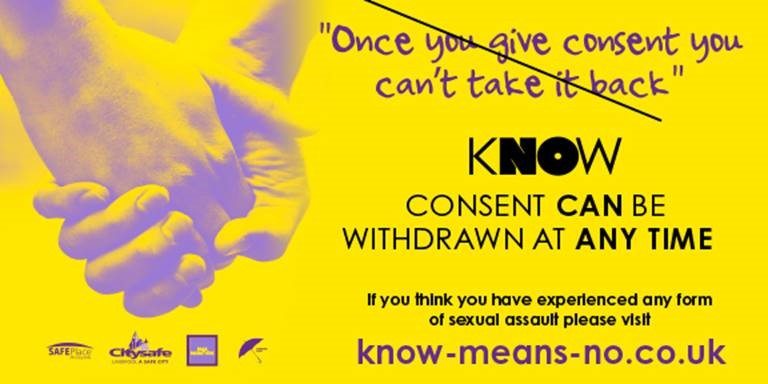 Emotive branding designed by the partnership

Organisations across Liverpool are coming together to make sure women and girls are safe in the city at night.

Studies have found that the risk of sexual violence is high in locations associated with the night-time economy – and women are 11 times more likely than men to be the victim of assault or rape.

To tackle the issues, Liverpool City Council is working in partnership with Merseyside Police, the city’s universities and registered charity RASA Merseyside – the rape and sexual abuse support service.

They are leading on initiatives which include:

In a commitment to make public transport safer, the partnership has applied for £270,000 of Safer Streets 3 Home Office which will be invested in promoting safer transport routes in and out of the city centre.

The bid was developed in response to a consultation with women and girls in Liverpool which highlighted the real fear of sexual harassment and sexual violence, particularly when travelling in and out of the city centre at night. The findings reflect the national picture, as in 2019/20 the Crime Survey of England and Wales found 69 per cent of women aged 16 and over said that they felt very or fairly safe walking alone after dark, in contrast to 89 per cent of men.

The Safer Streets funding was released following the murder of Sarah Everard who was abducted while walking home in London earlier this year. It is expected a decision on the bid will be made in September.

All Liverpool organisations and residents are encouraged to share and like social media information to raise awareness of these issues and highlight where to go for support if needed.

“These are shocking statistics and we are committed to working with partners across the city to make sure women are safe in Liverpool – particularly now that life is slowly returning to normal and our night time economy has mostly opened up.

“We are striving to end these appalling crimes, and by using thought-provoking messaging on digital platforms we can educate people about sexual violence – the key is to focus on preventing these crimes from happening in the first place.

“Together we can raise awareness and hopefully reduce the number of assaults and make our streets safe for everyone. It’s a sad reflection on our society that we have to do this, but everyone has the right to feel safe in our city and this campaign is an important step towards that goal.”

Inspector Charlotte Irlam, Local Policing said: “Liverpool is a vibrant city and we want to ensure women can enjoy a night out safely and without fear.

“In addition to our existing policing presence across the night time economy, Operation Empower sees specially trained officers tasked with identifying potential perpetrators as well as being aware of anyone who may be vulnerable to ensure any immediate safeguarding concerns are met.

“As a society we need to take a strong stance against attacks on women who should be empowered to live their lives without fear of sexual objectification, harassment, or physical and mental abuse. Together with our partners, Merseyside Police is actively addressing the fears being raised about violence against women, and we are trying to address them, with the ultimate aim of making our streets safer for women and girls.

“If women are subjected to rape and sexual abuse we and our partners will investigate and treat victims with dignity and respect.”

“Within the context of sexual assault, victim blaming is the term used to describe an attitude that suggests it is the victim rather than the perpetrator who bears responsibility.