A THREE month consultation has begun asking residents how Liverpool should be governed. 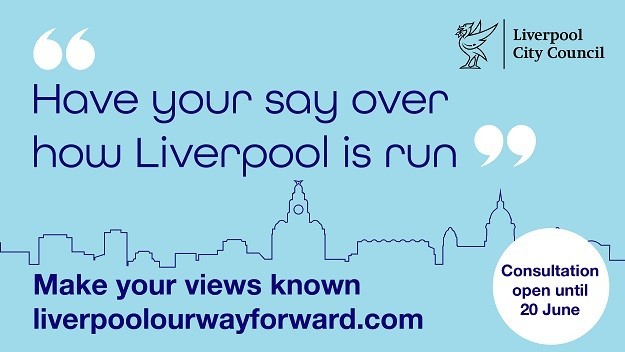 In April, a letter will be sent to every household in the city, with a secure link to an online portal, to answer the question: “How would you like Liverpool City Council to be run?”

The options are the three forms of governance that are allowed by law:

The documentation on the website includes a summary of how the consultation is being conducted and information about the models of governance and how they are different.

There will be instructions available in multiple languages, to make it as accessible as possible.

Paper copies of the voting form will be available on request for those without internet access.

A digital information campaign in support of the consultation will also take place to raise awareness and encourage
participation.

A referendum on whether to change governance arrangements was ruled out by Full Council on cost grounds as it is estimated it would have a price tag of £450k, compared to approximately £120k for the consultation.

A consultation is also the only way that residents can express a preference between all three governance options because a referendum can only be a choice between the mayoralty and one other option.

The webpage with details of the consultation – which will be ongoing until Monday 20 June – can be found at https://liverpoolourwayforward.com/.

The outcome will be reported to Full Council and the elected members will then make the final decision on whether to change governance arrangements, taking into account people’s views.

If Full Council agrees to make a change in governance, it will take effect from the elections in May 2023 and will be binding on the Council for five years.

It will still be possible to hold a referendum in this period if a petition of 5% of electors is presented to the council asking for a referendum of Liverpool electors to vote on whether to change governance model.

“The Council wants to give as many people as possible the chance to have their say over the future governance of Liverpool City Council.

“I encourage everyone to take part. Full details of how to participate can be found at liverpoolourwayforward.com and we will be sending out a letter to all households which will be dropping on their doormat in April.

“We are also happy for people to email or write in with their views on a change.

“A consultation is the only way that local people can express a preference for all three available governance models, and we have made the process as clear and simple as we can.

“People’s views in the consultation will be reported back to the Council, which will make the final decision on whether to keep the mayoralty or move to a different model of governance from May 2023.”